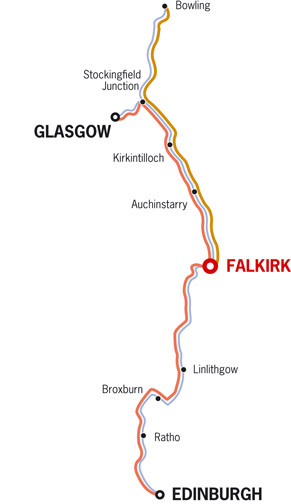 The Scottish Lowland Canals are quite different from the canals typical of England and Wales. The Forth & Clyde is much wider than the average English canal. The Union is a contour canal and has no locks at all nor bridges that have to be opened. British Waterways Staff currently operate all of the locks and bridges and boaters are not allowed to operate the locks themselves, although help is happily accepted.

Between Falkirk and Glasgow there are 4 locks and 3 road bridges, with a further 18 locks and a number of pedestrian bridges between Glasgow and Clyde at Bowling. Both the Forth & Clyde and Union Canals were closed in the early 1960’s and it was not until lottery funding was obtained in 1999 that restoration works rejoined the cities of Glasgow and Edinburgh by canal. At a quarter of the cost of the overall £84.5 million project, the Falkirk Wheel is the most significant structure by far, but only one link in the scheme involving rebuilding bridges, clearing blockages and cutting new stretches of canal. For more facts and figures visit www.thefalkirkwheel.co.uk but in summary the 25m level difference between the canals is traversed via a pair of gondolas which together carry 600 tonnes of water to the 100m aqueduct at the top of the 35m diameter wheel.